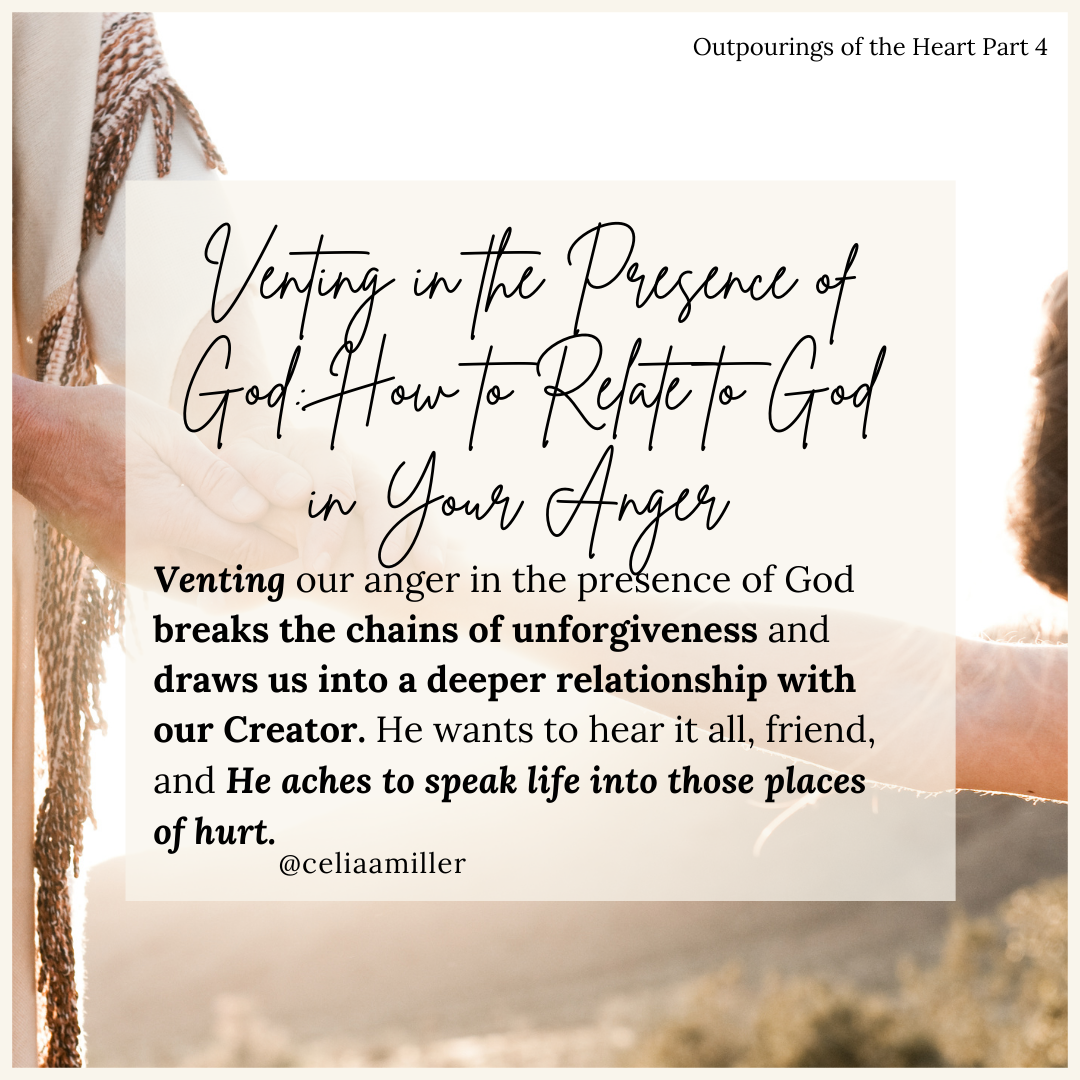 Venting in the Presence of God: How to Relate to God in Your Anger

Do You Take Your Anger to God?

Have you ever noticed that anger tends to be an emotion that doesn’t get talked about often?

For me, anger takes on various forms.

Sometimes, it swells up due to injustice against me or someone I love. I don’t particularly like bullies.

Other times, it’s a defense mechanism for when I’m really feeling sad and just don’t want to show it.

Either way, as an Enneagram 8, it’s something I tend to feel pretty intensely.

I was explaining this to a trusted friend a few years ago, and she asked me a question that I still remember to do this day:

Do you ever take that anger to the Lord?

I remember sitting there, stunned into silence. Well, no, I thought. Up to that point, I had never really thought about sharing my anger with God. And when my friend asked me why, the answer came plainly.

I didn’t really believe He wanted to hear that I was angry. Isn’t anger a form of complaining? Aren’t we supposed to love and forgive and then move on?

She then gently responded that God wants to hear it all.

He already sees my angry, hurting heart, so why try to keep it from Him?

The more I thought about it, the more I realized I wasn’t trying to keep it from God intentionally. I just didn’t know how to approach Him with a heart full of anger! Maybe He would be disappointed or just wouldn’t want to hear about it if it wasn’t full of lovey-dovey feelings.

But I’ve come to learn that being angry doesn’t make me a bad person, and allowing myself to fully feel it doesn’t mean I’m any less of a Christian.

In fact, even Jesus got angry! If you don’t believe me, read Matthew 21:12-17. It might just change your mind. And all through the Old Testament, we see God get righteously angry over His people being unfaithful to Him – just look at the first few chapters of Isaiah or read the book of Micah. He is a God of justice, and injustice against Himself and His people make Him angry!

Anger is normal, and I would go so far as to say that it’s part of living a wholehearted life before God.

To live wholeheartedly before God is to show Him every angle of our hearts, including the angry, bitter, resentful angles.

It’s important to learn how to go to God in every circumstance and with every feeling. Which is why today, I want to talk about how to relate to God with our angry hearts.

If there’s a man who mirrored the heart of God and His righteous anger, it’s our new friend, King David.

Let’s look at some verses from Psalm 109 and observe how David related to God in His anger.

I love how David immediately begins his Psalm by addressing God. He invites God into his present circumstance and doesn’t hesitate to reveal how he’s feeling. Not only does David address God, but he tells on the people that he’s complaining about! In the following four verses, he lists how his enemy has wronged him. He took his anger to God by venting about his enemy and being honest about the injustice against him.

King David, a man after God’s own heart, is asking God to kill the person who just wronged him! He then takes it a step further and asks God to basically ensure that his enemy’s kids have zero potential for a successful future and that his wife be widowed and left alone. But, wait, it gets worse! He asks God to make sure his enemy’s bloodline is cut off and that his sins, and the sins of his children, never be forgiven! Talk about some serious anger!! But if we’re honest with ourselves here, friend, have we ever felt like that in our hearts toward someone but were just too proud or afraid to take it to God? Have we believed that God couldn’t handle how we truly felt? Well, King David thought differently! And this is a man who knew God, who spent time in His presence and knew the inner workings of His heart. And yet, David still chose to be honest with his anger before the Lord anyway! What does this show us about the heart of God? It shows us that God is more than capable of handling our angry, bitter hearts and that He allows us — even wants us — to vent to Him! There is no safer place to vent our hurting hearts than at the feet of Jesus.

Notice that David didn’t allow himself to sit in his own anger. After pouring out the yuck in his heart, he acknowledged God. He asked God to help his wounded heart, knowing that doing anything in his own anger would not be honoring his Savior. He trusted God to intervene and chose not to take matters into his own hands. This is so important, friend, because, in our anger, it can be easy to let bitterness and resentment take root. But roots of bitterness only make us miserable, and we weren’t meant to live like that. We were created to live freely in Jesus, and it’s in His strength that we can face these situations and people that make us angry and choose to do what glorifies Him. David understood this and cried out to God for help, just as we should.

David trusted God to act on his behalf. He called on the Lord to fight for him, to prove his case for him. How many times in your life have you felt the need to prove yourself, friend? For me, it’s a constant battle! But David knew that God had his best interest at heart and chose to deny his flesh and his desire to act in his own strength, and instead asked God to reveal the truth of his character. Even in his anger, he looked to God and trusted that He would move.

David ends Psalm 109 by praising God. After getting the yuck out, venting, and then acknowledging God, his heart was ready and willing to praise. He reminded himself of who God was and chose to cling to the truth that God is a God who stands at the right hand of those who are oppressed.

From Venting to Healing

To really highlight how King David related to God in his anger, I want to show you the progression of events in Psalm 109:

How healing this process is, friend, when we choose to be honest and raw about our anger in the presence of God.

David eventually got to a place of praise, and I imagine all of his anger hadn’t dissipated, but I do believe he gained a heavenly perspective that he didn’t have prior.

When we choose to open ourselves up and feel our real feelings in the presence of God, we are allowing ourselves the opportunity to hear His voice. It is there that we begin to heal, preventing our wounds from rotting and smelling like bitterness and resentment.

Venting our anger in the presence of God breaks the chains of unforgiveness and draws us into a deeper relationship with our Creator.

He wants to hear it all, friend, and He aches to speak life into those places of hurt.

Maybe you’re like me, and you struggle to take your hurt and angry feelings to God.

Guess what? He understands.

And I think the process of having an open and honest relationship with God, of living wholeheartedly before Him, begins by telling Him where we’re currently at.

Tell Him you’re afraid or feeling awkward or uncomfortable! He already knows, so why not be honest about it?

From there, ask Him to show you His heart. Ask Him to give you the courage to approach Him boldly with how you feel, no matter how silly or upsetting it may seem.

Being Angry in the Presence of God Leads to Wholehearted Living

I want to leave you today with one last truth from Hosea 6:6,

“For I desire mercy, not sacrifice, and acknowledgment of God rather than burnt offerings.”

These are God’s words in the book of Hosea, where we find Him furious and deeply hurt by His people — the Israelites — who turned their backs on Him and broke their covenant to their God. In this particular verse, He’s explaining to His people that He didn’t want what was just on the outside.

He wanted what was on the inside. He wanted their whole hearts, hearts that desired to acknowledge Him and let Him be a part of every moment of their lives.

Even the ugly, awkward, and uncomfortable moments.

You are free to approach God with all that you are, friend. And you are free to sit in your feelings in His presence as He heals and works within you.

I pray that as you learn to relate to God in every aspect of your life, you would be reminded that God wants to relate to you, too.

Let Him and watch as the healing slowly begins.

The abiding ones experience a holy hushing amidst

“The days of a human life are like grass: they

The sunrise gently filtered into my kitchen this m

When @sarah_westfall announced a weeklong #liturgy

Soul care is the act of tending to our inner being

Are you craving stillness this summer? If so, Chec

Oh, how I wish I could’ve bottled up Maine and t

Airport reading is my favorite kind of reading. Be

“Your word is a lamp for my feet, a light on my

When I wrote this affirmation in my @growthrootsco

I have a question for you: what in your life recen

“But it’s not about growing tough enough to ta

“But whenever anyone turns to the Lord, the veil

Four words to end the month of May 🌿 Celebrate