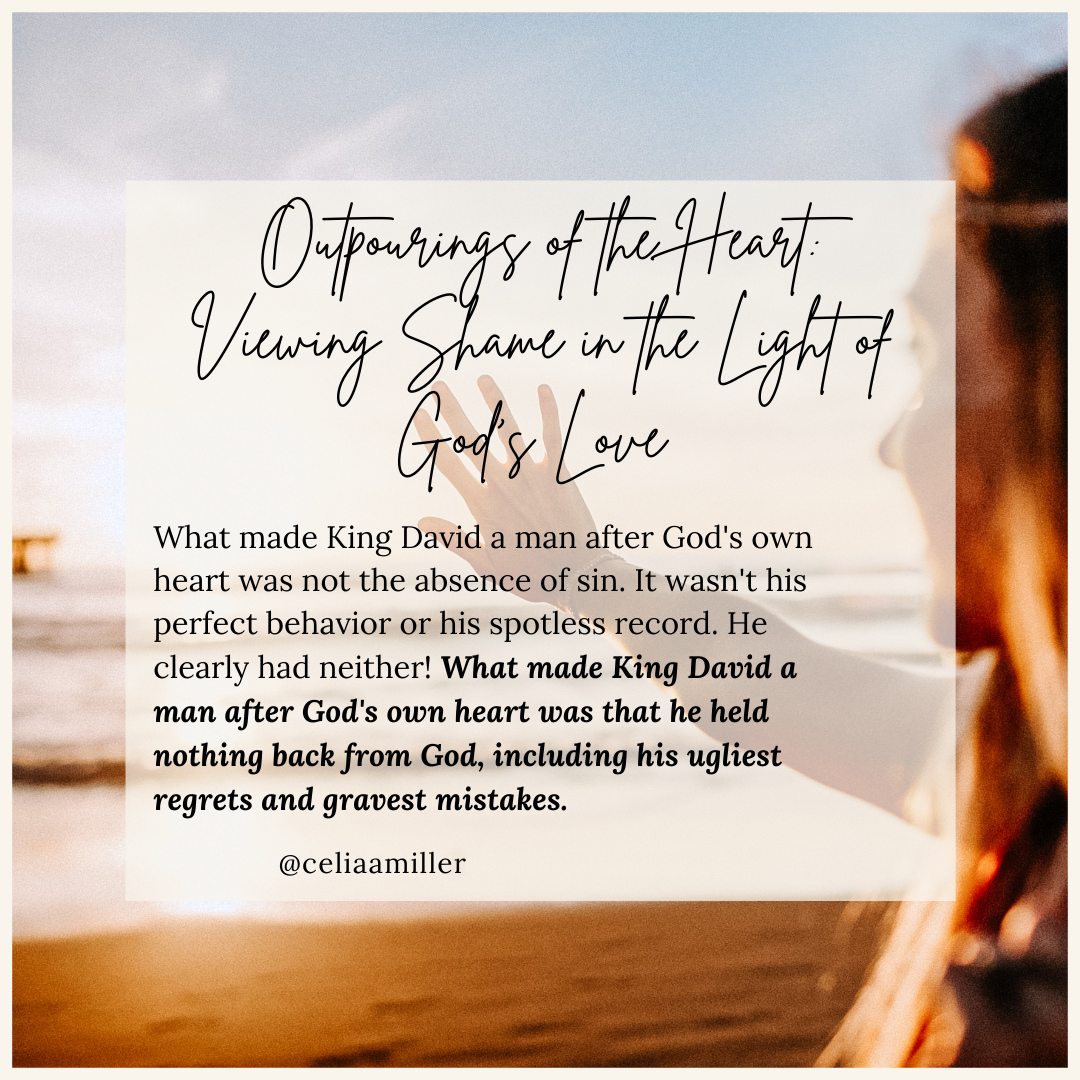 Outpourings of the Heart Part 2: Viewing Shame in the Light of God’s Love as Modeled After King David in Psalm 38

Have you ever felt so ashamed of something you did that running from God seemed the only viable option?

I’ve been there—more than once.

Shame is a painful feeling that causes distress and humiliation. It whispers that you are what you’ve done, and you belong in the dark because nothing or no one could ever make right what you made wrong.

Shame leaves you feeling broken. It leaves you leaking guilt, regret, and condemnation.

Shame makes you believe the lie that God could never love someone as filthy as you.

David, a king, known as a man after God’s own heart, made some pretty terrible mistakes and felt the hot, searing sting of shame. Even if you’re familiar with the story, go with me to II Samuel 11, where we find our King falling in love with a married woman.

Because David was immediately taken with her outward beauty and consumed with the desire to know her, he sent a messenger to find out about the woman. He learned that Bathsheba was the wife of a Hittite named Uriah. Despite knowing that she was married, David beckoned Bathsheba to his bed and made love to her anyway.

Soon after they committed adultery, Bathsheba became pregnant with King David’s child. David, spurred on by lust and the desire to have this woman belong to him alone, devised a plan to get rid of her husband, Uriah.

Uriah was a mighty warrior in David’s army who served faithfully alongside Joab, King David’s commander in chief. Knowing this, David wrote a letter to Joab and instructed Joab to put Uriah right in the line of fire, hoping that this would kill him. David got his wish, and Uriah, the mighty warrior, was brought to death in combat.

After enough time had passed, and Bathsheba took the appropriate time to mourn the death of her husband, David made Bathsheba his wife.

David got everything he wanted, but it came at a steep price.

A king known as a man after God’s own heart had committed adultery and now murder.

He lied, lusted, cheated, and devised plans that only bred deceit and destruction.

This doesn’t sound like a man after God’s own heart.

We’re told at the end of II Samuel 11 that David’s actions had greatly displeased the Lord. So, in the next chapter, we learn that God sends a prophet named Nathan to convict David of his wrongful actions.

How do you think King David responded, friend, when he realized the degree of his horrible actions?

Do you think he retreated into the darkness, licking his wounds as he ran away and hid? That’s what he deserves, is what you may be thinking, and perhaps, you’re right. But rather than allow the overwhelming weight of his sin and shame to keep him from God, he ran to Him.

We see David’s confession in II Samuel 12:13 as he recognizes what he has done wrong,

Then David said to Nathan, “I have sinned against the Lord.”

David’s sin had grave consequences, and the child that he and Bathsheba conceived together died. Because David was heavy with sin, loss, and shame, he poured out of his heart the words of Psalm 38 to the only One who could restore him.

Your arrows have pierced me, and your hand has come down on me.

Because of your wrath, there is no health in my body;

there is no soundness in my bones because of my sin.

My guilt has overwhelmed me like a burden too heavy to bear.

My wounds fester and are loathsome because of my sinful folly.

I am bowed down and brought very low; all day long I go about mourning.

My back is filled with searing pain; there is no health in my body.

I am feeble and utterly crushed; I groan in anguish of heart.

All my longings lie open before you, Lord; my sighing is not hidden from you.

My heart pounds, my strength fails me; even the light has gone from my eyes.

My friends and companions avoid me because of my wounds; my neighbors stay far away.

Those who want to kill me set their traps, those who would harm me talk of my ruin;

all day long they scheme and lie.

I have become like one who does not hear, whose mouth can offer no reply.

Lord, I wait for you; you will answer, Lord my God.

For I said, “Do not let them gloat or exalt themselves over me when my feet slip.”

For I am about to fall, and my pain is ever with me.

I confess my iniquity; I am troubled by my sin.

Many have become my enemies without cause;

those who hate me without reason are numerous.

Those who repay my good with evil lodge accusations against me,

though I seek only to do what is good. Lord, do not forsake me;

do not be far from me, my God.

Come quickly to help me, my Lord and my Savior.”

Our choices, whether good or bad, have an effect on ourselves and everything else around us.

David understood this after humbling himself and coming to a place of facing his sin and poor choices before the Lord.

But I want to point out, friend, that David didn’t stay in a posture of shame.

He allowed his guilt and conviction to drive him to the feet of Jesus.

He allowed the overwhelming realization of what he had done to drive him to repentance.

The Power of Repentance

What made King David a man after God’s own heart was not the absence of sin. It wasn’t his perfect behavior or his spotless record.

He clearly had neither!

What made King David a man after God’s own heart was that he held nothing back from God, including his ugliest regrets and gravest mistakes.

He took his sin and his shame and laid it at the Lord’s feet. He bore his broken soul to the One true King, trusting that God’s love for him was greater than the sins he committed.

David ran to the King in repentance.

But true repentance cannot happen if we are so focused on our sin and shame that we hide it away from God, believing the lie that we are now too dirty to enter into His presence.

I love 1 John 1:9 in The Passion Translation as it explains God’s response perfectly when we choose to come to Him in sincere repentance:

But if we freely admit our sins when His light uncovers them, He will be faithful to forgive us every time. God is just to forgive us our sins because of Christ, and He will continue to cleanse us from all unrighteousness.

He will be faithful to forgive us every time.

It doesn’t say that God will be choosy or that certain sins are greater than others or that He forgives some sins easier.

No, His Word says that He is faithful to forgive us every single time, all of our sins.

Now, this isn’t a free pass that says we can now do whatever we want because God forgives us so freely. I believe God searches the intentions of our hearts, and our repentance must live up to the word’s definition.

To Repent: to feel or express sincere regret or remorse about one’s wrongdoing or sin.

Our hearts must be sincere, Sis.

I have to admit, there have been times when I have sinned against God by dishonoring someone else, and I haven’t felt guilty about it one bit.

I was angry, and my actions felt justified, and in those moments, I asked the Lord to soften my heart and see the situation from His eyes.

I asked Him to give me a Heavenly perspective. I asked for Him to humble me as I sought His wisdom for the situation.

I was totally honest with Him about how I was feeling in that circumstance, and that’s what He calls us all to do, sister.

I know that shame is deep and dark, and it can be hard to believe that we are loved so fiercely by a God who washes us clean in a single moment of touching His presence.

So I want to leave you with another truth from Romans 8:38-39 (TPT), and I pray you hold tight to it as a reminder that your shame – your sin, your mistakes, your regrets – can’t even compare to the love that God has for you.

So now I live with the confidence that there is nothing in the universe with the power to separate us from God’s love. I’m convinced that his love will triumph over death, life’s troubles, fallen angels, or dark rulers in the heavens. There is nothing in our present or future circumstances that can weaken his love. There is no power above us or beneath us—no power that could ever be found in the universe that can distance us from God’s passionate love, which is lavished upon us through our Lord Jesus, the Anointed One!

Even King David royally screwed up, Sis. But his gravest mistakes did not have the power to take away his royal identity as a child of God!

David trusted in this love, and he poured out his whole broken, messed up heart to God and made room for His presence to bring healing and restoration.

You are not what you’ve done! You are not the sins that you have committed!

You are fiercely and unconditionally loved by God, who sees past the sin and shame to the beautiful, lovely, valued woman you are.

Be like David, friend, and allow repentance to lead you to an ever deeper and richer relationship with the God who loves you more than you could ever possibly imagine.

A Time for Reflection

Just as I did last time, I want to leave you with some reflection questions and a small assignment that I hope will open the door to you living wholeheartedly before God.

Is there something in your life, a mistake you’ve made, that’s causing you to feel ashamed? What is it? Give it a name.

If so, I would encourage you to get away for a while and find a quiet spot. Open your heart to Him, dear one, and talk to Him openly about what’s weighing on your heart. Don’t hold anything back. If you feel uncomfortable praying aloud or finding yourself getting distracted praying quietly, then find a journal and write out your prayers to God.

What do you hear Him saying to you and about you? Write it down.

If it helps, write out a Psalm of repentance just as David did in Psalm 38.

Be like David, friend, and allow repentance to lead you to an ever deeper and richer relationship with the God who loves you more than you could ever possibly imagine.

Psst! If you want to catch up on the blog series, ‘Outpourings of the Heart: a blog series of exploring the Psalms of David and how he related to God’, check it out here!

The abiding ones experience a holy hushing amidst

“The days of a human life are like grass: they

The sunrise gently filtered into my kitchen this m

When @sarah_westfall announced a weeklong #liturgy

Soul care is the act of tending to our inner being

Are you craving stillness this summer? If so, Chec

Oh, how I wish I could’ve bottled up Maine and t

Airport reading is my favorite kind of reading. Be

“Your word is a lamp for my feet, a light on my

When I wrote this affirmation in my @growthrootsco

I have a question for you: what in your life recen

“But it’s not about growing tough enough to ta

“But whenever anyone turns to the Lord, the veil

Four words to end the month of May 🌿 Celebrate