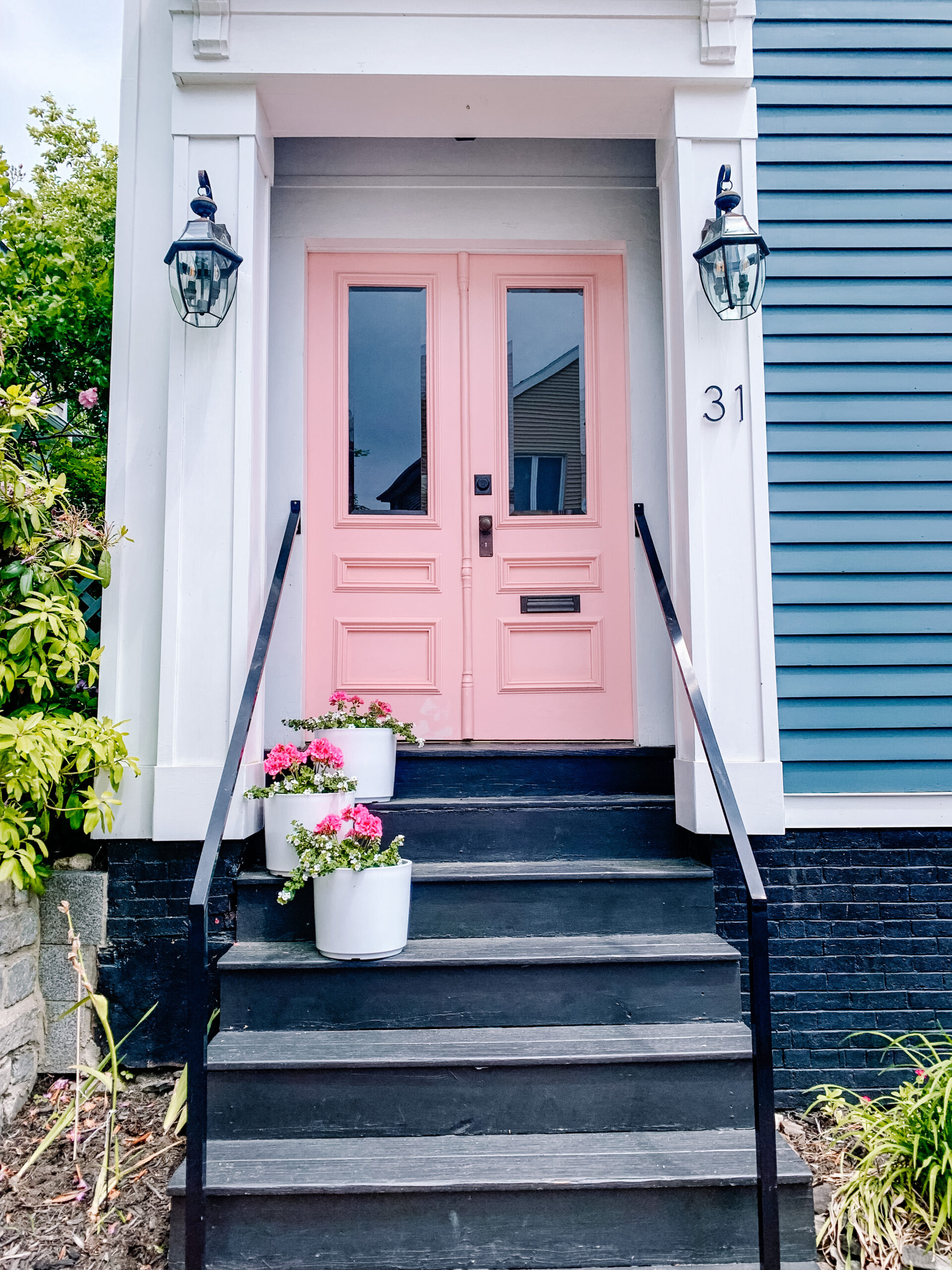 Altars & Open Doors: Learning to Behold God in the Waiting

I saw an image of a door.

The door didn’t seem very special; it was stark white with an ugly gold, round brass doorknob, and a sign on the front with big, bold letters that read, ENTER.

I hesitated, then approached the door feeling a little… disappointed. I wanted my door to be pretty! It was plain white and I wanted a soft pink or baby blue. Could there at least be green ivy growing or a sign written in pretty lettering instead of the bold, boring, black letters that adorned it now?

But despite my disappointment, Jesus was there, and He smiled knowingly. He reached for my hand and together, we turned the doorknob.

On the other side of the door was a landscape so beautiful, so serene, it knocked the breath right from my lungs.

It was a wooded area, filled with the greenest, tallest trees I had ever seen. I could hear birdsong and the steady melody of a brook flowing somewhere. There were dirt paths that led to a small lake below and high, mighty mountains that seemed to act as its protector.

My senses overwhelmed, I became to run, not wanting to miss out on any of it; wanting to take it all in at once.

But halfway down the path, I heard a voice calling to me from behind; the voice of the One who had opened the door with me.

“Slow down, Beloved! You’re going to miss the details. Abide in me.”

I slowed, recognizing the voice and yearning for it to come nearer. And so He did, and we walked the path together in silence for a few moments before I asked, “Abba, what are we doing here?”

He smiled that knowing, tender smile, and said, “We’re going to grow.”

A Desire to Grow

At the beginning of this year, the Lord placed inside of my soul the desire to grow.

That word, “grow”, kept threading itself into my prayers, into the books and blogs I was reading, and even into the sermons I would listen to.

Jeremiah 17:7-8 landed in my lap one early morning like a well-watered promise getting ready to bloom,

“Make me like a tree planted by the water, Lord.”

This liturgy gave a name to a deep desire, an invitation to dig deep and learn the true meaning of grit-filled grace.

With this desire to grow spiritually pulsing inside of me, I began researching different spiritual direction programs. I wanted to spend the next two years learning and growing alongside other believers who felt called to the same contemplative path that I myself do.

After finding a spiritual direction program right here in Indianapolis, not more than a 30-minute drive from my front door, I thought this had to be where God was leading.

So, I took a leap of faith and decided to apply.

References were handed in, applications were filled out, and a meeting with the director of the program was scheduled. In that meeting, I shared with her my life story up to that point, testimonies of God’s good and faithful heart despite my broken down and busted up one, and what the Lord had been showing me lately.

I shared with her my life’s pursuit of beholding God in all things and how I wanted to grow deeper spiritual roots. I was thirsty, and I wanted to drink up as much of God and as much as I could learn about living in the Spirit as I could.

Our conversation was rich and full of promise, and I felt confident that I had a good chance of getting into the program.

I wanted to be a spiritual director, and I was certain that this program is where God was calling me to be.

But when I opened the email that held what my future might look like for the next two years, I was sadly surprised to find out that I had not been accepted after all.

The email was kind, and she explained that because of my age, they felt I needed a bit more life experience before becoming a spiritual director and encouraged me to apply again in a few years’ time.

I thanked her for her time and gave my many blessings to the cohort that I was disappointed not to be a part of this year.

“What am I supposed to do now, Lord?” I thought to myself.

The disappointment didn’t crowd out the hunger I still felt growing in my heart to learn and go deeper spiritually, but I had no idea where I was supposed to go from there.

Confused and a little sad, I did the only thing I knew to do.

I named my frustration and my sadness in the Lord’s presence and then I prayed and I waited.

I poured out my heart; my dreams, my longings, and my reasons why knowing that He caught every word and held every question.

The words from Jeremiah 17:7-8 kept coming back to my mind,

“But blessed is the one who trusts in the Lord, whose confidence is in him. They will be like a tree planted by the water that sends out its roots by the stream.” (Jeremiah 17:7-8, NIV)

I was doing just that one morning when the Lord gently reminded me of the image he had given me shortly after my meeting with the director of the program I didn’t get into.

The image of the door and what lay behind it.

That image, that promise, that invitation was what kept me searching.

I was like Abram in Genesis 12:7 building my altar to the Lord as I waited for that promise to unfurl.

Abram didn’t stop with the promise, he didn’t cease movement in the midst of his waiting on the promise to be fulfilled. He carried on and built more altars,

And I felt called to carry on, too. Even in my waiting on the door that the Lord promised to open, I moved with Him. I continued to call on Him.

Waiting doesn’t always mean doing nothing. Waiting can end up being the greatest act of faith we ever execute on this side of heaven.

I prayed because praying into an unfulfilled promise is how you fill yourself up and ready your soul to one day receive that promise.

I surrendered daily because the reaching out of tired, confused hands is what brings the kingdom of God near.

I waited, and in my waiting, I researched other spiritual direction programs, but none of them felt right. I came across online video courses but knew I wanted the depth and spiritual sharpening of a community.

I remembered the promise, built my altars, and continued to move with God.

Then the day came when I was looking at a spiritual direction program that I knew my own spiritual director had gone through and loved dearly. Feeling in my spirit that it wasn’t yet time for that, I clicked on the other courses they had to offer.

And as soon as I saw that five-letter word that Jesus had said to me in that wooded area, I knew the door had finally been opened.

That was the name of the program, and that had been Jesus’ invitation to me as we walked along the dirt path in that wooded area in the image He gave me weeks ago.

It was an invitation to be molded and formed into the image of Christ as I clung to the vine and simply abided.

After reading through the course requirements, I decided not to apply right away. I wanted to wait until my husband and I got back from Maine and continued to rest, wait, and pray for clarity. I wanted to make sure that this was where God was truly leading.

So, when we returned, I felt the nudging in my spirit to apply.

I carried on, built more altars, prayed, waited, and trusted.

And as I built my altars and prayed my prayers, God was working.

On the morning of Tuesday, June 28th as I was getting ready to meet a friend in downtown Indy for brunch, I gave a hallelujah shout of praise as I read my acceptance email.

An Open Door & An Invitation to Behold God in the Waiting

This is the door that I had been waiting to go through.

It wasn’t at all what I expected or even what I originally wanted to do. But sometimes those unexpected open doors end up being the most transformative experiences of our lives.

My desire for that spiritual direction program in Indianapolis wasn’t a waste of time. No, it was an echo, a holy hint, that pushed me downstream to where God really wanted me to be. It was an arrow that took its sweet time to land, but finally did on precisely the door I was supposed to walk through.

I share my story with you today, friend, to encourage you in your own waiting, wondering, and wandering.

I share this story with you today to embolden you to cling to the promises that God has spoken over you. To keep building your altars, praying your prayers, naming your longings and feelings, and then carrying on with Him.

I share this story with you today to invite you to behold God in the unknown, to acknowledge He’s here, and to keep faithfully tending to the dreams and longings He’s placed inside of you.

Grab hold of that Abram-sized faith and go where God leads,

“The Lord had said to Abram, “Go from your country, your people, and your father’s household to the land I will show you. “I will make you into a great nation, and I will bless you; I will make your name great, and you will be a blessing. I will bless those who bless you, and whoever curses you I will curse, and all peoples on earth will be blessed through you.

And I pray you would continue moving, too, my friend. To keep searching and looking for God in all that has yet to fall into place.

God has a plan, and His faithfulness reaches to the heavens and back again to meet you right in the middle of all that feels heavy. You can carry on in confidence, and build your altars with hope because the One who holds your dreams also holds you.

This waiting, dreaming, altar-building, raw praying, reaching, and aching is holy work and you are standing on sacred ground.

Everything on my Etsy shop, The Beholding Co., is

A rich, sweet life is made of small wonders; littl

Happy Thanksgiving from mine to yours 💛

The Shepherd knows that without quietness and rest

For most of us, this week tends to look and feel a

As a writer and an introvert, I tend to spend a lo

I’m thankful for friends like these who come as

I look out my window and ever so softly, snow fall

Rays of gold poked through the November grey sky t

At first, the silence was a bit intimidating. We

Mother Teresa once said, “Listen in silence, be

There’s something about hot soup that warms the

Poems give our souls language for words we have tr

“Hurry is the great enemy of the life of the spi

Have you ever noticed that when the leaves fall, t

Poetry for me has recently become a new way of lis

I used to think that spiritual practices consisted

I’ve been trying out a new daily Sabbath rhythm