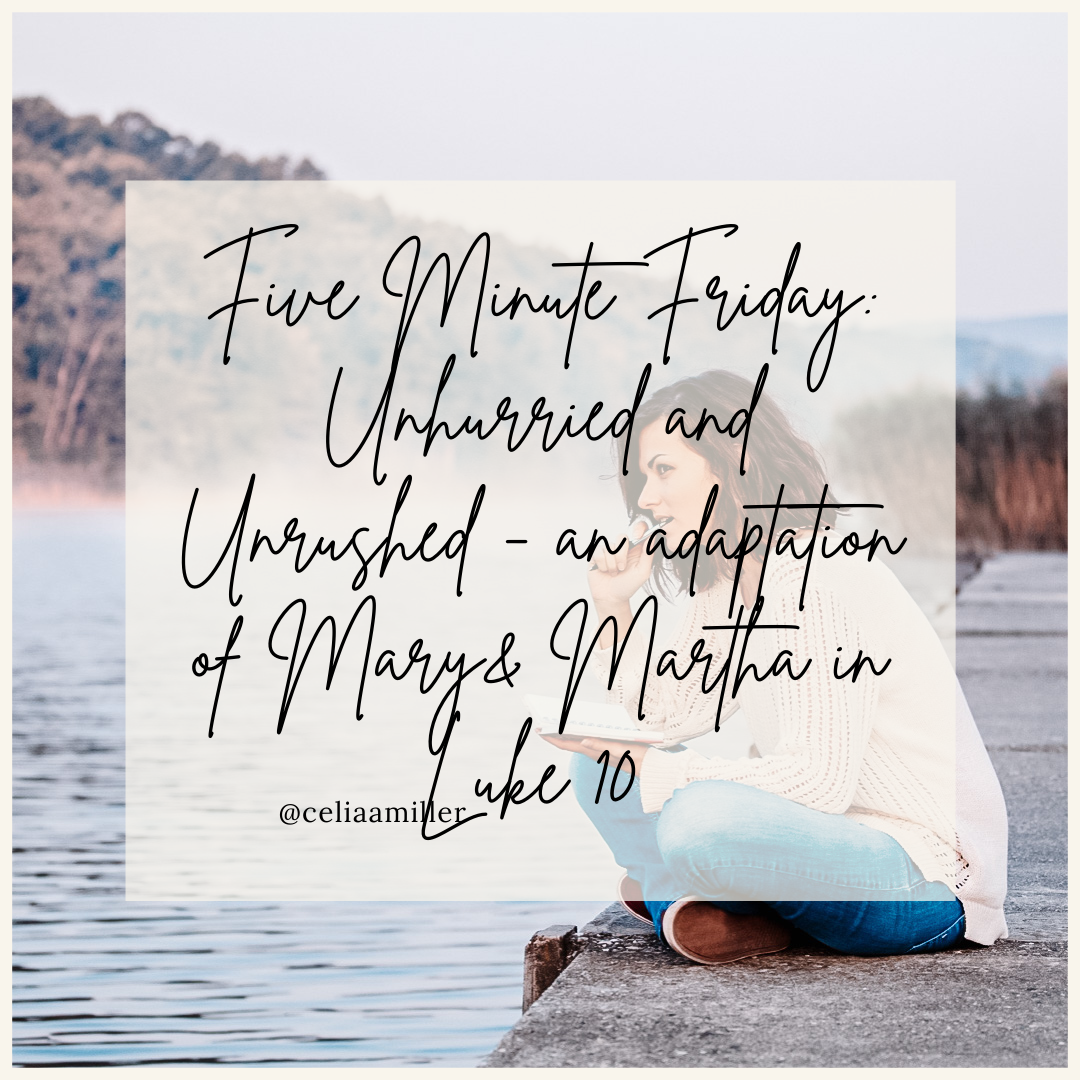 I’m joining today with the Five Minute Friday community of writers who write for 5 minutes about a one word prompt.

The town was abuzz with His arrival.

Every man, woman and child was alive with nervous anticipation and excitement. Nothing stayed quiet for long in small-towns like Bethany, and the news of the coming King spread like wildfire.

Even her sister grew anxious with the news, as she combed her hair back and wiped the dirt from this morning’s chores from her face.

Martha fussed and mumbled something about the Messiah coming to their little town of Bethany as she began preparing the meal that would feed their acclaimed guest and His friends.

The smell of garlic, leeks and onions soon began to permeate each and every corner of their cozy, quaint home. Soon, Martha was reaching for the figs and grapes to prepare something sweet to go with the savory and the mouthwatering scents lingered on Mary’s tongue.

Mary watched her sister in wonder as she moved with grace, confidence and ease, her anxiousness slowly dissipating with every swift slice of her knife. She had always admired the way Martha could go from zero to one hundred in a matter of seconds, her presence commanding and in control.

A woman always with a plan.

Mary silently retreated from her sister’s glorious domain because slow had always been Mary’s way and she knew she would only bring disruption to her sister’s controlled chaos.

Outside her window, the commotion grew louder, signaling that someone important was coming.

Soon, there was a knock at their door.

At the sound, Martha laid down her work, straightened her dress, and tucked her hair behind her ears. Just as she was about to open the door, she paused, took a deep breath and then invited the Messiah in.

Mary didn’t know what to expect, really. He was a plain man at first glance, with olive skin and dark hair.

It was the kindness of His eyes though that stole her breath and the way He smiled as if He had known her all her life.

He held Martha’s hands in His as He thanked her graciously for hosting Him and His weary friends. They had traveled far and looked tired and hungry.

Mary had stood up when their guests arrived, but as Jesus made His way toward her, she had the sudden urge to sit.

Martha continued her work in the kitchen, focused, reserved and quiet now that their guests we’re here. Her bustle turned silent but Mary knew her sister well enough to know that silence didn’t take up much space in her head.

The Messiah moved at a strangely familiar pace, slow and rhythmic. She knew this pace, His pace, but why did it feel so recognizable?

Unhurried, Jesus sat down in the wooden chair closest to the fireplace. And like water knowing its whole life how to move downstream, Mary knew her place was at His feet.

She sat, their eyes locked and for a moment, Mary thought she could see all of Heaven in His dark eyes.

The noise from the kitchen and the voices of the men hummed and then hushed all at once until all she could hear was the sound of their breathing. He didn’t say anything, just smiled and waited.

He looked tired. A little weary even from His travels and Mary noticed His feet were dusty and the hem of His robe a little muddy.

He let out a deep sigh, a sigh of a man who was relieved to have the company of a friend who wanted to know how He was doing.

“I am. My work is tiring but more than worth it.”

His smile grew wide and his chuckle reverberated deep in His chest and suddenly, Mary felt like a small child. Not in a condescending way, but in a way that made her feel safe and held.

“I work for my Father’s glory and in doing so, I get to spend the rest of eternity with you. That’s what makes this weariness worth it. That’s my heart’s deepest desire. To gather those that belong to me so I can sit with them and talk with them forever, just as I’m sitting here with you.”

He went on and talked about Heaven and His Father and the Spirit that would one day be given to her and the rest of humanity. He talked about peace and love and grace and Mary drank it in like cool water on the hottest day of summer.

Mary sat and listened to what He was saying, and it was then that she realized why His pace had been so familiar to her.

It was the pace she had walked her whole life amidst a busy and loud world. Among a world filled with people who didn’t understand her desire to be still, slow and unrushed.

Even her sister and her mother had failed to understand and she remembered being chastised for not trying harder or going longer.

But now, watching Him, she knew deep in her bones that there was no other way to live.

And she would remain unhurried, walking to the pace of His unforced rhythms of grace and listening to the sound of His sweet voice for the rest of this life and beyond.

Everything on my Etsy shop, The Beholding Co., is

A rich, sweet life is made of small wonders; littl

Happy Thanksgiving from mine to yours 💛

The Shepherd knows that without quietness and rest

For most of us, this week tends to look and feel a

As a writer and an introvert, I tend to spend a lo

I’m thankful for friends like these who come as

I look out my window and ever so softly, snow fall

Rays of gold poked through the November grey sky t

At first, the silence was a bit intimidating. We

Mother Teresa once said, “Listen in silence, be

There’s something about hot soup that warms the

Poems give our souls language for words we have tr

“Hurry is the great enemy of the life of the spi

Have you ever noticed that when the leaves fall, t

Poetry for me has recently become a new way of lis

I used to think that spiritual practices consisted

I’ve been trying out a new daily Sabbath rhythm